Over 50 Years of Community Engagement

NOMCO's Executive Board members are elected by the membership, and serve a term of one year, beginning in September (the start of the fiscal year). 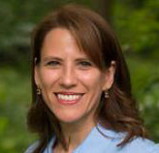 Laura Rogers is grateful for the opportunity to serve as President of NOMCO after many years of involvement with the organization, and looks forward to cultivating the friendly and neighborly character of NOMCO.

After graduating with a degree in Finance from the University of Illinois Urbana-Champaign’s School of Business, Laura spent several years supporting trading and operational functions as a bank analyst, followed by a transition into financial Information Technology (IT) services.

Taking a break from the banking area, she later spent several years as an IT consultant, during which she honed her skills as a public speaker and presenter.  She returned to the banking space to take on the support and management of IT projects in the wake of the 2008-2009 financial crisis. She continues to work as a Senior IT Program Manager with Bank of America in the area responsible for the software generating financial risk calculations across global derivatives trading desks.

In 2015, she was a speaker at the annual Illinois Renewable Energy Conference as she presented on a favorite interest:  retrofitting older homes with solar, geothermal, wind, and other forms of alternative energy, while implementing simple practices to conserve for optimal energy efficiency.

In keeping with this interest, Laura chaired the Environmental Beautification Commission for the Village of Maywood for many years (2008-2019), which combined pursuits of environmental concerns for the good of the community with endeavors to bring about community interest in beautifying the village.

Having grown up in a historical home just a few hundred yards from the DesPlaines River and Lake Street, Laura has considered it a privilege to participate in and contribute to several of the Maywood Historic Homes Housewalks. She chaired the last two Housewalks (2015, 2018), raising the visibility to a larger media audience and upgrading the print and media materials to a professional level. Learning more about Maywood’s history brings full circle a reconnection with family history of residence and activity in Maywood dating back to the 1920’s and continuing to the present day.

As an adult, she moved to the south suburbs, returning in 1990 to care for her widowed mother. After reaquainting herself with Maywood, she became engaged in civic and local political activities.

From 2005 to 2015, Audrey held the office of Village of Maywood Trustee, including serving in the capacity of Mayor Pro Tempore. During her time as Village Trustee, she chaired the Village's Finance Committee, and maintained her membership in both the Illinois Municipal League and the National League of Cities.

She was appointed by the NLC President to the Finance, Administration and Intergovernmental Relations Steering Committee in 2011, where she served until 2013, making recommendations to the Federal government on finances as related to municipalities.

In addition to her NLC committee work, Audrey served as a NLC Leadership Training Institute Board Member beginning in 2010, including serving as the Leadership Training Council Vice Chairman from 2011-2013. She was also a member of the National Black Caucus of Local Elected Officials from 2010 -2014, during which she served as the Illinois Regional Director (2010-2011) and as the Parliamentarian (2011-2013).

Throughout her years in public office, Audrey was also a Women in Municipal Government Member.

Audrey's civic activities locally have included many years of membership with NOMCO, as well as with the Maywood Chamber of Commerce, for which she has served as a Board Member since 2009 (including as Board Chairman from 2011-2014). She also served as the Annual Banquet Committee Chairman from 2008-2015. In 2016, she brought her skills to the Maywood-Proviso Rotary Club as a member and as the Annual Auction Chairman for the organization.

Over the years, she has been recognized and received numerous awards and appointments for her participation. Audrey has always believed in living a life of dedicated public service and giving back to her community.

Vanessa Rankins has lived in Maywood for many years, and joined NOMCO in early 2020. She was elected to the position of Secretary later that year. Vanessa was involved at the municipal level of the Village of Maywood for many years, including an appointment to the Maywood Housing Authority Board, for which she served for 10 years as a Commissioner.

Professionally, Vanessa has over 20 years of experience in the real estate industry as a Broker/Agent.

In addition to her civic engagement, Vanessa is active with her local church, having served in the capacity of Director of Education and Sunday School Teacher.

Vanessa has a fervent passion for giving back, and has worked to build alliances with leaders in the community. Her objective is to educate, inform, and teach in relation to home ownership.

Vanessa and her husband, Jerry, have 4 adult children and 13 granchildren. Her flexibility allows her to enjoy spending time with the family, traveling, speaking, and sewing.

Viola Mims has served as a member of NOMCO since 2010 and currently holds the position of Treasurer.  In 2013 Viola was elected Village Clerk of the Village of Maywood, and continued on to serve two full terms.  Viola is the Managing Broker of Vintage Realtors & Associates, and the CEO of VDM Investment Company, a real estate investment and property management company, a subsidiary of Vintage Realtors.

A resident of Maywood for over 40 years, Viola has many years of community involvement.  She is a graduate of Proviso East High School, received a certificate from Triton College in Real Estate ,and became a licensed realtor through the State of Illinois as a certified Licensed  Real Estate Managing Broker. In 2011, Viola graduated from Westwood College with a Bachelor of Arts degree in Criminal Justice.

Viola holds membership and Executive Board positions with Proviso Maywood Rotary and the Maywood Chamber of Commerce.  She has worked with Neighborhood Restorative Justice Mediation and PLCCA (Proviso-Leyden Council for Community Action) in their mentorship and motivation programs for youth.  While completing her internship at PLCCA, Viola gained experience and knowledge in her field as a juvenile counselor.

Through the different engagements and involvement in the community, Viola remains passionate and committed about helping families and residents come together to be a part of Maywood growth and development.

JoAnn Murphy was raised in the Humboldt Park and New Town neighborhoods of Chicago, eventually ending up in Wicker Park before settling in Maywood in 1999. She has been an active member of NOMCO for most of the 21 years she has been here.

Her career and public life have taken many paths. Those paths include extensive experience in the residential mortage industry, providing direct support services to the developmentally disabled community, as well as service at the governmental and community organizational level.

She has served as an Aldermanic Aide for the City of Chicago, a Commissioner on the Village of Maywood's Local Liquor Control Commission, and as a Director and/or Chairman on the Boards of the Maywood Rotary Club, NOMCO, Unity Church of Oak Park (UOP), and Magdalene House Chicago (MHC), an organization dedicated to supporting victims of sex trafficking. JoAnn has also served as the appointed Deputy Village Clerk of our village.

She currently holds the position of CEO at Thrive Therapeutic Services, LLC, a mental health provider, and is a Program Assistant within the Federal Aviation Administration's (FAA) Certification and Airworthiness Division.

JoAnn's many achievements include holding a Certificate in Paralegal Studies, being recognized as a Certified Municipal Clerk, and obtaining an Associate Degree from Triton College.

JoAnn looks forward to serving the members of NOMCO as Communications Officer with anticipation of a great year ahead of us.

We welcome your support.  Membership dues cover our normal operating expenses, and additional contributions allow us to host projects and events which showcase our village and bring our community together.

Please contact us to learn about membership, volunteer opportunities, and how to support our community initiatives.

Subscribe to the NOMCO e-mail announcements and news here.

Get Social with Us

Recommend this page on: